BY UPESI NEWS TEAM,NAIROBI,5TH JUNE,2022-Azimio la Umoja One Kenya presidential flag bearer Raila Odinga and his running mate Martha Karua have been cleared by the Independent Electoral and Boundaries Commission (IEBC) to contest for in August 9 presidential polls.

Odinga was handed the clearance certificate by IEBC Chairperson Wafula Chebukati at the Bomas of Kenya on Sunday.

Speaking after the exercise, Odinga called on the electoral agency to play its role in a free and just manner to ensure credibility in the national elections.

“We have confidence that the IEBC has got the capacity to conduct free and fair elections.  We therefore would like to urge you to live by the script and do exactly what the people of Kenya expect of you,” Odinga said.

Odinga further called on Kenyans to conduct themselves peacefully during and after the electioneering period even as he defended the media’s coverage of presidential campaigns as objective amid concerns of skewed reporting by a section of media houses.

“We would like to see a free and fair electoral process, we want this exercise to be done also in a free manner, we want Kenyans to be able on the 9th of August to freely express their will, to speak freely that these is what Kenyans want,” Odinga said. 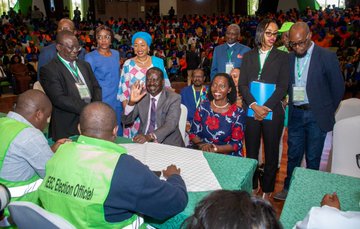 He further pledged to conduct himself together with his supporters in a manner that conforms with the requirements of the electoral laws and laws.

Also present at the event was the Royal Media Services Chairman Macharia who owns Citizen TV and a dozen other networks.

Earlier, Odinga attended a church service at the All Saints Cathedral in Nairobi before proceeding to Bomas.

After being cleared by IEBC, Odinga proceeded to Undugu Grounds in Langata for a rally before traveling to Nakuru where he will hold roadside rallies.

On Monday, the Azimio La Umoja One Kenya presidential flagbearer will unveil his manifesto at the Nyayo National Stadium.

The clearance by IEBC marks the beginning of intensified vote-hunting contest across the country as he seeks to succeed President Uhuru Kenyatta. 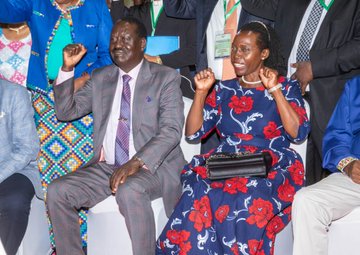 Odinga will be taking on his main opponent Deputy President William Ruto.

On Saturday, DP Ruto was cleared to contest for the presidential seat on August 9, becoming the fourth candidate to earn his spot on the ballot paper.

Ruto was presented with the clearance certificate and a sample ballot paper at the Bomas of Kenya in Nairobi by the IEBC Chairperson Wafula Chebukati.

While expressing his gratitude for being clearance, Ruto reaffirmed his confidence in the capacity of the IEBC to conduct the elections.

“I want to commit that my team in Kenya Kwanza and I will work with you diligently so that we can have free, fair, credible, democratic, and verifiable elections. Anytime you need our cooperation or in any way our support, Mr Chairman I want to tell you we are available,” he said.

He called on his supporters to do everything they can to “protect it (the election) from violence and unnecessary sideshows.”