BY NAMULONGO PETER,NAIROBI,2ND JUNE,2022-Deputy President William Ruto Thursday slammed President Uhuru Kenyatta’s government, accusing it of having protected persons accused of corruptly benefiting from the highly publicized Covid-19 scam at the height of the pandemic.

This, as the DP hit back at the Head of State for his Madaraka Day position that the second term of the Jubilee government was more successful.

According to the DP, the second term was less more successful than the first, and he blames the 2018 March Handshake President Kenyatta had with Azimio la Umoja One Kenya Coalition boss Raila Odinga.

But it was on President Kenyatta’s pointed accusation that corruption had become the biggest impediment to even greater progress in his 10-year term that Dr Ruto went for his boss.

“I agree with President Uhuru Kenyatta that corruption is the biggest impediment (to development). But corruption should not be personalized and weaponised against the political opponents and the people you do not like while protecting corrupt people who are your friends, political allies or members of your family,” Dr Ruto said during a breakfast meeting with European Union (EU) ambassadors at his official Karen residence.

According to Dr Ruto, the anti-graft war was lost when it was taken away from the institutions that should fight it.

“We need to institutionalize it and make the institutions autonomous.  That is how, for example, Covid billionaires escaped (justice) because they were friends of people who are now telling us they want to fight corruption,” said Dr Ruto.

He added: “If the fight against corruption was left to the institutions, the Covid billionaires will be behind bars as we speak.”

The Sh. 7.8 billion Covid-19 scandal at the Kenya Medical Supplies Authority (Kemsa) is billed as one of the biggest scandals in President Uhuru Kenyatta’s 10-year reign. 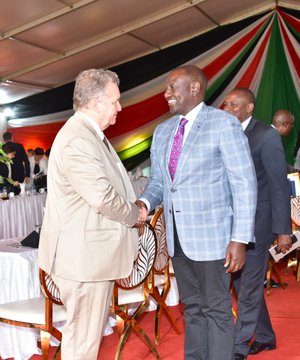 The scandal involved officials from the body who took advantage of the Covid-19 pandemic to buy the personal protective equipment (PPE) at exorbitant prices at the expense of the taxpayer.

Both the National Assembly and Senate have already carried out investigations separately into the matter and tabled a report.

Last year, the Public Investments Committee (PIC) indicting the culprits and calling for further investigations that they said should lead to arrests and prosecutions.

In his Madaraka Day speech, President Kenyatta said corruption was a big problem he had to fight in his administration.

President Kenyatta said when he took over reins of power in 2013, state corporations were ‘rotten’ and he had to drain the swamp with the help of the military.

“For the next administration to multiply our dividend and continue raising the bar, therefore, it must work from the inside out.  It must not backslide on the corruption ‘clean-up’ agenda,” President Kenyatta said.

“You cannot implement Big Push Investments in an environment of political strife and hypocrisy.  My Government has achieved more in the second term than we did in the first term. And the record must reflect that this is true of all sectors,” he added. 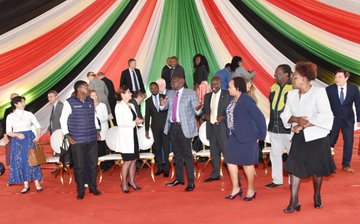 President Kenyatta recalled how Uhuru Gardens which was the centre of celebrations yesterday was slowly sliding into the hands of unscrupulous individuals who had grabbed part of the historic ground.

“My joy today is that my administration has restored the sanctity and historical significance of Uhuru Gardens. Following many years of neglect, this historic site had become a den of thieves.  In fact, it is on record that the 68 acres on which these sacred grounds sit had fallen into the hands of some unscrupulous individuals,” President Kenyatta said.

So daring were the corrupt in Kenya, the President said, that there was an attempted land grab of the Wilson Airport runway.

“In the past, all land matters were handled using a manual registry. And this made the Ministry of Lands a den of corruption.  In fact, part of the Wilson Airport runway, to my left, had a Tittle Deed registered in the name of a private entity,” President Kenyatta.

In his meeting with the EU envoys, Dr Ruto said President Kenyatta had, in his speech, failed to inform Kenyans of many projects in the Big Four Agenda that had stalled due to the handshake.

“We started off well in 2013 and you saw him mention quite a number of projects that we have achieved such as road connectivity, railway construction, and electricity connections in rural areas, NHIF. But what did not come out is the Big Four because the handshake completely annihilated it. That is why there was no mention of the Big Four Agenda yesterday,” said Dr Ruto.

“Much as there was an attempt to explain that the handshake helped finalize our first term plan, but the handshake completely undermined our Big Four. We have crafted a new plan to implement some of the things that were not implemented due to the confusion brought about by the handshake,” Dr Ruto said. 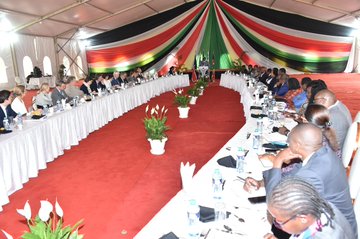 In response to Mr Kenyatta’s endorsement of Raila Odinga’s running mate Martha Karua as the next deputy president, Dr Ruto said his alliance takes the issue of gender balance seriously and is committed to ensuring the inclusion of women if they form government.

“We are alive to the issue of gender and committed to achievement of two thirds. We will have 50% of our cabinet who will be women. Our coalition also has the largest number of candidates who are women in the upcoming August 9 polls as compared to our competitors. Of those running for governor, we are almost certain that five will be elected,” said Dr Ruto.

He was speaking at Kenya Kwanza Alliance meeting with the European Union (EU) envoys at his residence in Karen.

During the meeting, his economic team led by Dr David Ndii unveiled its economic blueprint and identified areas of collaboration with European countries.

Among the areas identified by his team is regional security, climate change and the creation of agro-processing industries.