BY JOAN WANJIKU,NAIROBI,4TH MARCH,2022-Gatundu South Member of Parliament, Moses Kuria, has announced that Chama Cha Kazi party is in talks with the Kenya Kwanza political faction on a possible pre-election coalition.

Kuria’s announcement is an indication that he will work with the United Democratic Alliance (UDA), a party linked to Deputy President William Ruto, Amani National Congress (ANC) of Musalia Mudavadi and Ford Kenya of Moses Wetangula.

In a post shared on his Facebook account, on Friday, March 4, Kuria explained that Chama Cha Kazi is working to form a grand coalition with DP Ruto’s UDA and over 20 other political parties ahead of the much contested August elections. 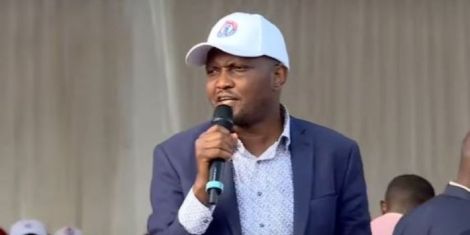 “This is to inform Kenyans that Chama Cha Kazi Party and 21 other political parties are in early talks with the Kenya Kwanza Alliance that will lead to a very broad-based grand coalition that will deliver the nation to peace and prosperity. Details to follow,” stated the outspoken Legislator.

Kuria’s relationship with the Deputy President has been unclear after the later refused to join other leaders during the Gatundu MP’s homecoming and thanksgiving ceremony on February 19 in Thika.

In a televised interview late last month, the Gatundu South MP expressed doubt on the Kenya Kwanza alliance, noting that at the time he left the country, the UDA outfit was affirmative on not seeking alliances with other parties.

“Things change, DP Ruto is still my friend… My intention initially was for both parties to work together but at that point, Ruto and UDA were categorical that they were not for alliances, so there was no opportunity at that time to discuss areas of convergence.

“I have since seen that there is a UDA, Ford-Kenya, ANC pact. I assume that Ford-Kenya and ANC are parties from Uganda so we will wait for our chance for them to engage with parties from Kenya,” Kuria remarked during the interview.

He noted that when he left the country to seek treatment in Dubai, United Arab Emirate, UDA and ANC were keen to point out issues based on economy and debt crisis, a position the MP stated that was at the heart of his political ideologies.

At the same time, he expressed doubt on calls by the Kenya Kwanza team for abolishing of the Competency Based Curriculum (CBC).