BY JOAN WANJIKU,NAIROBI ,16TH JAN,2022-Award-winning gospel singer-songwriter and TV presenter, Kambua Mathu. has announced her exit from Citizen TV after 12 years with the station.

Kambua hosted the morning show, Rauka every Sunday Morning alongside Ken the Deejay.

After minutes of teasing about a big surprise on Sunday, January 16, Kambua finally revealed that she will be leaving the station and as the show’s host. 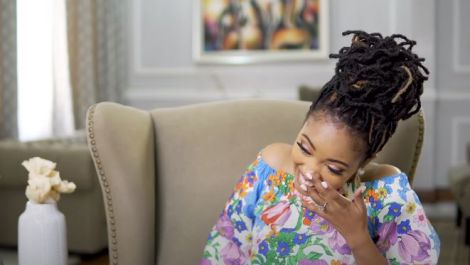 Kambua stated that life is about change and particular seasons of a person’s life are expected to change. She, however,did not disclose specific details of her plans moving forward.

“I need to tell all of you, my dear Rauka people, who are so dear to my heart, that life is about seasons and that’s the beauty of life.”

“Today I’d like to take a bow and hang my boots and say goodbye for those who have allowed me to come into your homes for 12 good years through Gospel Sunday. thank you so much for loving me and cheering me.. it really has been a beautiful journey,” she stated during a live Citizen TV broadcast.

The TV presenter thanked the team and her colleagues for being accorded the chance to host the show- despite not possessing the requisite skills at first.

“I’ll start by thanking our chairman Our Managing Director Wachira Waruru who took a chance on me when I was very green and had no experience and said that I’m going to do this job,” Kambua recalled.

“You won’t be seeing me here but you will see Ken and other wonderful people who will continue to carry this vision forward,” she added.

She became the show’s host after Enid Moraa had exited from hosting Rauka show because of personal commitments.

At the time, Kambua had taken a break following the loss of her baby, Malachi Manundu, Muthiga Mathu.

“I am so blessed to be a mother of two adorable boys; one who’s here giving me the best cuddles, and another in heaven, who I’ll one-day hold again. Jesus and I are going to have to co-parent on this one. As for my broken heart, I know that someday I will meet Jesus, and it will be made whole,” she announced on May 28, 2021.