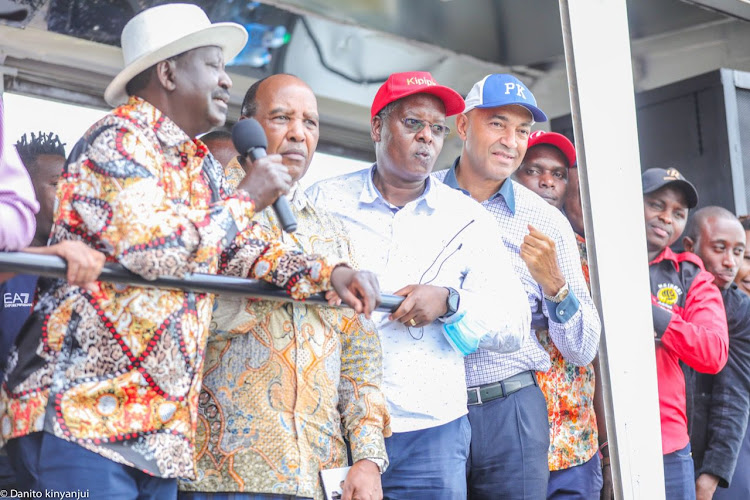 ODM leader Raila Odinga campaigning for his 2022 presidential bid in Nyandarua accompanied by a number of leaders.
Image: ODM

BY NAMULONGO PETER,NYANDARUA,6TH NOV,2021-ODM leader Raila Odinga on SATURDAY toured Nyandarua county in a move aimed at silidifying his base in the central Kenya.It is during this tour when Youths from Mt Kenya asked  Raila to pick Peter Kenneth as running mate

Raila Odinga’s tour to the central region has again yielded fruits as the youths from the region have promised to support his 2022 presidential bid.

The ODM leader took his campaign to Nyandarua County on Saturday to mobilise the residents to support him.

During the visit, Raila was accompanied by a number of leaders from the region, including Nyandarua Governor Francis Kimemia, former MPs Maina Kamanda and Peter Kenneth among others. 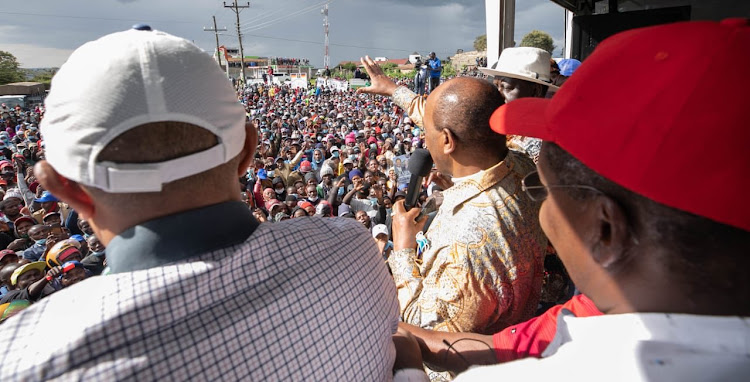 The youth from the region being led by Linford Mutembei, the chairman of Mt Kenya Youth Caucus asked Raila to consider naming Peter Kenneth as his deputy.

Kenneth is among the people from the region who have been accompanying Raila to various functions within and outside the region, including Nakuru Governor Lee Kinyanjui.

While speaking with the People Daily, Mutembei said former Gatanga legislator stands the better option for the position, since he has been in politics for a long.

He added that while the majority of the people from the region have agreed to back Raila, picking his running mate is another obstacle since there is no consensus as to who should be the person.

The youth leader said that the region needs someone who will unite the region. 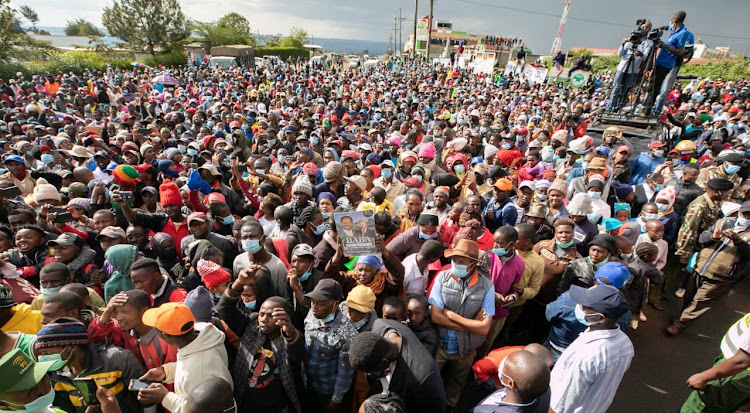 Peter Kenneth has been seen several times in meetings with President Uhuru Kenyatta and the former Prime Minister.

Recently, the Meru Jubilee branch appealed to the President to support Agriculture CS Peter Munya as Raila’s running mate in next year’s election.

The members said they will abandon the party and rally behind other candidates if their preferred candidate is not blessed to take on the mantle as a running mate from Mt Kenya.

The members want the revival of the party from top leadership to grassroots to roar once more like it was in 2017.

They said they will continue supporting the handshake between Uhuru and Raila.

Also, the Western region, as well as the Coastal region, is looking forward to having their person as Raila’s deputy.

There have also been speculations that the president’s favourite CS Fred Matiang’i might be the man to deputies Raila.