Speaking at the Eldoret Recruits Training School when he presided over a pass out parade, the Head of State said the soldiers must strive to be outstanding in their service and conduct in line with the long tradition of excellence associated with the Kenyan military.

“Today as you join the Kenya Defence Forces, remember that our military commands honour, respect, and admiration in the region, and, indeed, across the globe,” he said.

Uhuru asked the servicemen to adhere to every norm, rule, and law that governs their operations, in addition to executing their duties with discipline and authority.

He added that they must always commit to becoming better people each and every day.

“You must be loyal to our nation, our values, and our institutions. In everything you do, whether in or out of uniform, whether on duty or off-duty, you must be above reproach and the model soldier,” he said.

“Be the soldier that future graduands look up to and seek to model their behaviour on.” 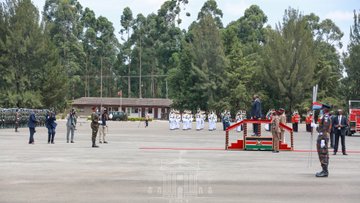 He noted that his government invested heavily in upscaling aerial, maritime, and land equipment, and also improved remuneration and benefits of personnel al giving a conducive working environment.

“Kenya boasts a highly capable, well equipped, and superbly trained military that can deliver superlative results across a variety of missions,” Uhuru said.

“Whether it is in international peacekeeping operations, or in defending our borders, or in assisting civilian agencies in humanitarian disaster response, or in collaborating with other concerned agencies within the security and intelligence sectors.”

He called on Kenyans to work in collaboration with security agencies at all times and always report threats to the country’s peace and security.

Uhuru was accompanied to the pass out parade with First lady Margaret Kenyatta and a host of leaders including; Defence Cabinet Secretary Eugene Wamalwa, Uasin Gishu Governor Jackson Mandago and Chief of Defence Forces Robert Kibochi, among others.