BY JOAN WANJIKU,NAIROBI,16TH SEPT 2021-A day after the Catholic bishops Called  for mediation between President Uhuru Kenyatta and Deputy President William Ruto their sentiments seems to have been received positively .

Last month, the National Congress of Pentecostal Churches and Ministries called for a truce between Uhuru and his deputy.

The clergy urged the President to engage his deputy to try and find a solution to their differences while appealing to the DP to be willing to sit down with his boss and resolve the differences before they get out of hand.

Responding to the calls, the DP has said that he is more than ready to talk with his boss.

Speaking at his Karen residence home on Thursday when he met grassroots leaders from Kandara constituency, Ruto said that he has full respect for his boss, Uhuru. 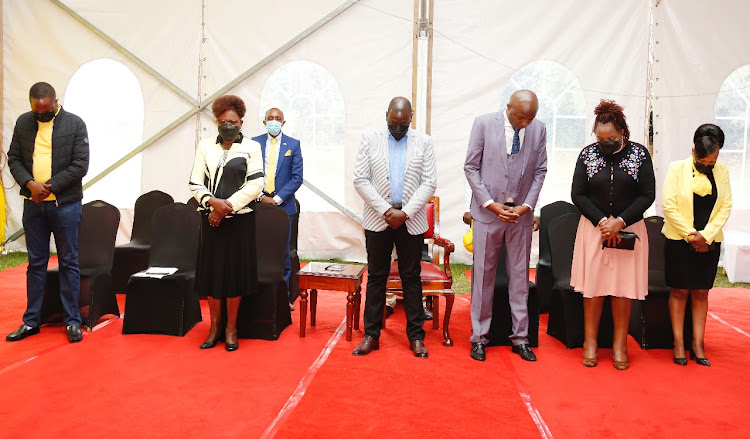 He added that there are a few people who came in between them with ill motives.

“Without condition, any moment because we were both elected by Kenyans and they gave us mandate to run this government.”

Hitting out at opposition leaders who are now involved in the government, the DP asked them to be patient and wait for the next election.

The DP’s remarks come as calls from his opponents demanding his resignation keep rising.

The bad blood between the two leaders saw Uhuru daring his deputy to resign if he is not ready with his administration.

ODM leader Raila Odinga backed Uhuru’s sentiments, saying that dishonest members should be kicked out of the party.

The clergy had expressed hope that the two leaders would come to an understanding for peace to reign as the country gears towards the 2022 General Election.

During the meeting, the DP said regretted that leaders were absconding their duties by engaging in politics that was adding no value to the people.

He also criticised the government for the hike in fuel prices at a time when Kenyans are struggling under the Covid pandemic.