BY JOAN WANJIKU,NAIROBI,7TH AUG 2021-A Turkish national who was part of the entourage in Deputy President William Ruto’s aborted trip to Uganda was Saturday detained by immigration officers and police in Nairobi.

Harun Aydin was detained by immigration officials on landing in Nairobi from Uganda where he had been since August 2.

Officials said they wanted to question him in regard to his immigration status, work permit and the business he is involved in the region.

Police also questioned him. Officers from the anti-terror police picked him for further questioning.

They said there was information they wanted to clarify from him.

He was taken to the Anti Terror Nairobi Offices on Ngong Road and later the Nairobi area police station. 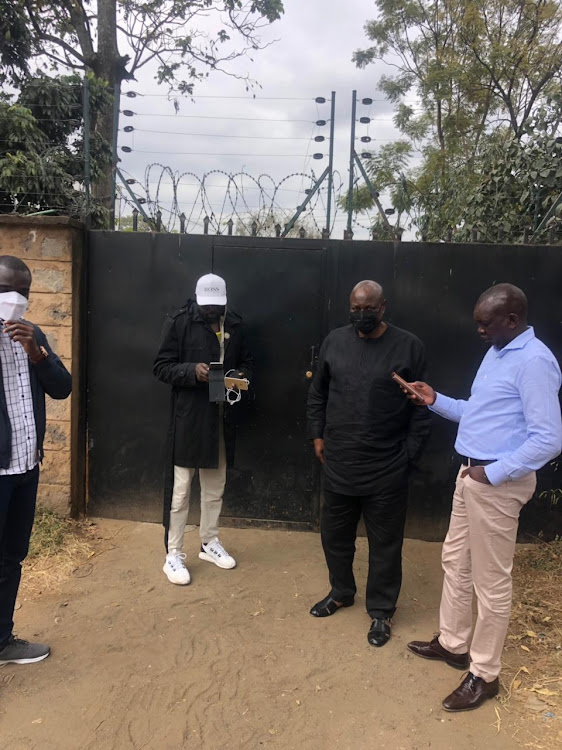 Kapseret MP Oscar Sudi with lawyers outside at the Anti-Terror Nairobi Offices on Ngong Road where Harun Aydin had been detained on August 7, 2021./COURTESY

He was issued a working permit by the Department of Immigration Services in Kenya on June 30, 2021, and it is supposed to expire on June 29, 2023.

His detention was well known before his plane touched down in Nairobi as most Ruto supporters seemed to know about it and shared it online.

Lawyer Cliff Ombeta along with Turkish nationals outside at the Anti-Terror Nairobi Offices on Ngong Road where Harun Aydin had been detained on August 7, 2021.
Image: COURTESY

“The State has been sponsoring stories of Turkish businessman in the newspaper, I have no doubt that if he comes to Kenya he will be arrested even if it’s for few hours just to get to link DP Ruto with a crime or something for political interest. The losers are currently desperate,” said Elgeyo Marakwet senator Kipchumba Murkomen minutes before the incident happened.

Lawyer Ahmednassir Abdullahi said he had been denied access to see him allegedly “on orders from above”.

Aydin was among those who were held at Wilson on August 2 as they prepared to leave for Kampala.

The rest in the group flew but Ruto was denied the clearance on claims he needed to be cleared by authorities.

Ruto has since defended the presence of Aydin- a controversial businessman – whose presence is said to have spooked government officials.

The DP said Aydin is a well-known businessman, appearing to downplay the controversy that surrounded the Turkish’s presence as the only foreigner on the foreign trip.

The issue has caused debate in the country, especially after it emerged he bears a similar name with the one charged with terror in Germany two decades ago