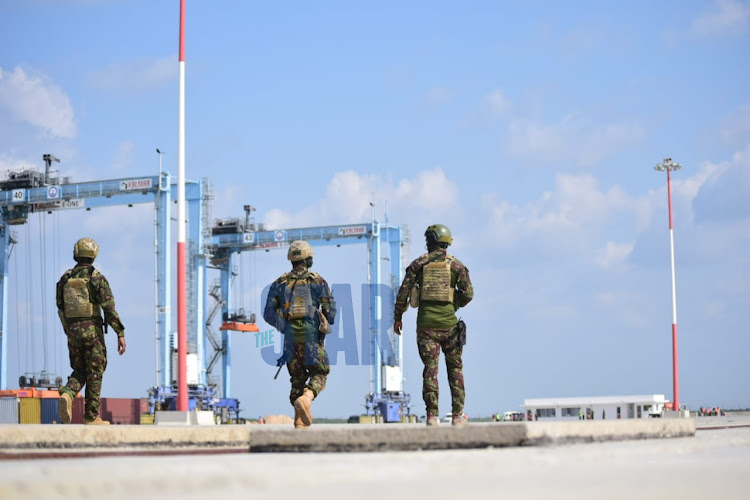 Security officers patrolling the port before the President’s arrival on May 20, 2021./COURTESY-THE STAR
BY PSCU/LAMU,20TH MAY,2021-President Uhuru Kenyatta on Thursday presided over the operationalisation of the first berth of the 32-berth seaport in Lamu.

The President will witness the docking of the Singaporean MV CAP Carmel, the first ship to dock at the deep sea port.

Uhuru commissioned the port, nine years since its construction begun.

“Benefits of Lamu port go beyond the sea. Supporting infrastructure such as roads and enhanced security to and from the port are overhauling the economic ecosystem of Lamu County and surrounding regions,” State House said in a tweet.

Accompanied by 10 governors, four cabinet secretaries and host of regional leaders, the Head of State said Lamu Port will be an equal employer for all Kenyans.

Uhuru said they will in a few months time come back to Lamu with several African heads of state to launch all the three berths of the Port.

Berth one is 100 per cent complete, berth two and three will be completed in July and October respectively.

Uhuru said the Kenya Ports Authority should give employment opportunities to the local youth first.

The President said during the ground breaking ceremony of the port in 2012, the naysayers said the project will not be achievable.

“Many said the dream will not be achieved.  But today we are here to start operating the first berth. We have put to shame naysayers,” said the President.

On the issue of security in Lamu, Uhuru said local residents have a role to play.

“We know all the bad elements that live in our midst. We should work closely with the police to root out all criminals,” said the President.

During the launch of the port, Uhuru received the first vessel to dock, MV Cap Carmel.

He issued a certificate of first call to the Captain of the vessel.

A second vessel to dock at the facility was the MV Seago Line.