The CS received the donation at his office in Afya House.

The donation included over 10,000 KN95 face masks and at least 2,000 disposable isolation gowns.

Present during the ceremony was the MultiChoice Kenya chairperson Dr. Naim Bilal.

The CS said that the government was pursuing the acquisition of one million doses of vaccines each from Pfizer as well as Johnson and Johnson respectively to supplement the AstraZeneca vaccines.

The CS said that Pfizer, which requires minus 70 degrees in storage if acquired would not pose any challenge since the government would also acquire the special storage facilities to go with them.

The CS made the remarks when he answered questions from the media soon after he received a donation from MultiChoice Kenya Managing Director Nancy Matimu.

Kagwe said Kenya has only three sources where it acquires the vaccines. They include the government to government like the recent donation of 100,000 doses acquired from the government of India. 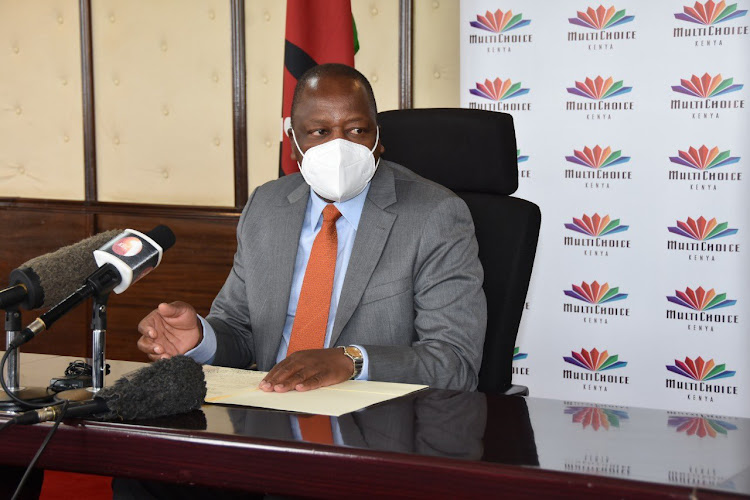 Kagwe said Kenya has only three sources where it acquires the vaccines.
Image: MINISTRY OF HEALTH

The second platform is the Covax facility where the government acquired 1.1 million doses and the last one is the African Union.

He said under the African Union facility which Kenya is yet to utilize, they have negotiated rates with manufacturers where the country can acquire the vaccines at discounted rates.

The CS said the government banned the private sector role in vaccines because of the confusion it was going to create, as well as the risk of some people taking advantage to sell the doses to Kenyans whereas they are being given free of charge.

He pointed out that the supply chain had complicated the acquisition of more vaccines to the country but noted that the government was working tirelessly to ensure the stocks don’t run out.

Kagwe noted that under the Covax facility, Africa had expected to acquire 75 million doses but so far only 12 million doses had been delivered.

The CS noted that India the manufacturer of the AstraZeneca vaccines was going through a challenging time with over 200,000 cases on covid-19 being recorded daily.

He pointed out that it was for this reason India had slowed down the supply of AstraZeneca to address the problem in their country.

He added that there has been a drop in the positivity rate being witnessed in the country in the last two weeks and that he hopes Kenyans will maintain it that way to further curtail the spread of the virus.

Also, the CS said pointed out that the drop in positivity rate can be attributed to the containment measures being adhered to by Kenyans.

He said that there have been spikes being witnessed in certain counties which might complicate matters, and appealed to the County Covid-19 Committees to take stringent measures to curtail the spread.

The spikes were being witnessed in the counties of  Murang’a, Uasin Gishu, Siaya, and Nyeri.

The CS further said the government was aware that the current restriction measures in place were painful and were hurting Kenyans but noted that there was no alternative because the cases must be brought down.

He said there was pressure to open up certain areas of the economy such as sporting activities.

“For the time being, we have to strictly adhere to the containment measures, until such a time that we bring down the cases and our positivity rate,” Kagwe said.

The CS said the hospitalisation rate and those being admitted into the Intensive Care Units continues to be high.

“We don’t want to have a situation where one cannot get treated in hospitals for other ailments,” he said adding that as painful as the restriction’s measures are concerned, the containment measures must be adhered to.”