BY KORIR JUMA,NAIROBI,6TH APRIL,2021-The national government through the Rift Valley Regional Commander George Natembeya has ordered a 6 p.m. curfew in three counties after noting brazen disregard for the law.

Speaking to the press on Tuesday, April 6, the no-nonsense administrator announced the restoration of 6 p.m. to 6 a.m. curfew in Baringo North and added Turkana East and Laikipia to the list.

In his statement, Natembeya also directed that security operations in the region should take effect beginning Wednesday, April 7.

This is after the government observed a spike in insecurity practices in the region that led to deaths and loss of property. 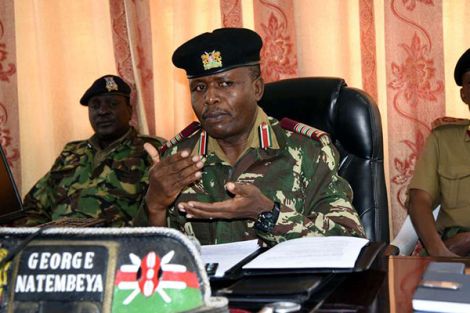 “We have decided that even though the 30 days allowance was to end on April 23, we do not have time to wait. We have decided to restore the security operation which shall begin tomorrow. The operation this time will be more lethal.

“We shall not just target Baringo but also Turkana East and Laikipia. You already know that thugs still cattle and hide them at Laikipia nature conservancy. Some residents of Turkana East have also been firing guns rampantly,” directed Natembeya.

He further disclosed that a number of leaders had been inciting the locals to demand Ksh100,000 before surrendering the guns as directed by the state.

“When the citizens are told to present illegal firearms, some political leaders claim that the individuals must be paid Ksh 100,000 each for surrendering them

“This led to reluctance by locals to hand in the firearms. If that is the case, we observed that our initiative was now being frustrated,” he added.

The directive comes barely a month after the National Police Service (NPS) held a public participation programme with locals from Baringo North and agreed on a 30-day window period to hand in their illegal guns.

The participation later led to Interior CS Fred Matiang’i lifting the dusk to dawn curfew that had been introduced earlier in the year.

“We shall however retain the 10.00pm-4.00am curfew in line with the Presidential directives on the revised Covid-19 containment measures.

“Cattle rustling, banditry and general lawlessness has been brought under control. Learning and other socio-economic activities have also resumed,” stated Matiang’i on March 23, 2021.

Matiang’i had instituted the curfew after a Chief Inspector in charge of the Rapid Deployment Unit (RDU) in Kapedo and his driver were on Thursday evening, January 22, shot dead at Ameyan bridge in Tiaty constituency.

They were ambushed while on their way to Kapedo trading center to join the team of multi-agency security personnel.