BY CORRESPONDENTS,DODOMA,22ND MARCH,2021-President Uhuru Kenyatta was on Monday forced to cut his speech at the Jamhuri Stadium in Dodoma, Tanzania after the Muslim call to prayer during the funeral mass of John Magufuli.

Uhuru who was eulogizing the late president John Magufuli temporarily stopped his speech for two minutes from 12.53 pm to 12:55 pm in honour of the Adhaan in a nearby mosque in Dodoma.

The adhan is the Islamic call to prayer, recited by a muezzin at prescribed times of the day.

Adhan is called out by a muezzin from the mosque five times a day, a whole day long in the event of religious holidays traditionally from the minaret, summoning Muslims for obligatory prayer. 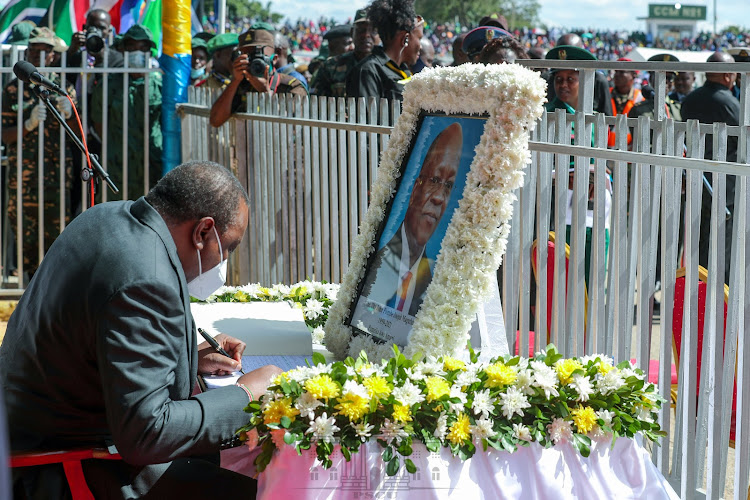 Uhuru sent his condolences to the people of Tanzania saying the two countries will work together.

“He was a respected leader in EAC and the world. For several years, he has shown that Africans have the capacity to be independent,” he said.

“I am here to mourn a friend, a close friend, we used to talk on a daily basis and we exchanged ideas regarding Kenya and Tanzania and EAC.”

Uhuru said he was shocked by Magufuli’s death and had to make it to the funeral.

“We will work together, and bring EAC together and I have no doubt that my sister [President] Suluhu, you have been shown the road, it has been opened, go ahead,” Uhuru said.

“Like Joshua was told …do not be afraid. Be courageous.”

Uhuru is among several heads of states in Dodoma for the state funeral mass of Magufuli.

Magufuli has left behind seven children and 10 grandchildren.

He died of chronic atrial fibrillation, a condition he battled for 10 years.

Uhuru who doubles up as the Chairperson of the Esat African Community was accompanied by CS Adan Mohammed and arrived at the Uhuru grounds a few minutes after 10 am.

President Kenyatta examines a shirt that was on sale at the Kenyatta International Convention Centre/PSCU BY PSCU/NAMULONGO PETER,1ST APRIL  2017-President Uhuru Kenyatta today pitched for the “Buy Kenya, Build Kenya to create jobs for the youth” when he visited a grand sale to export quality cheap branded new clothes. “This initiative accords Kenyans an opportunity […]

BY NAMULONGO PETER,NAIROBI,27TH JAN 2020-The family of Felix Orinda popularly known as DJ Evolve, who was shot and seriously wounded by Embakasi East MP Babu Owino, on Monday  opposed the release of the lawmaker on bond/bail. In a bail assessment report presented in court , the family says it is majorly concerned about the security […]

BY JOAN WANJIKU,NAIROBI,6TH MARCH 2022-Energy Cabinet Secretary Monica Juma has urged the public to report the vandalism of Kenya Power infrastructure after fifteen transformers and equipment worth over Sh70 million were recovered in Ruiru. Speaking to the press on Sunday, Cabinet Secretary Monica Juma stated that this will contribute immensely to the safeguarding of these […]