BY JOAN WANJIKU,NAIROBI,16TH MARCH,2021-One of the top three candidates for the heated Machakos Senate by-election has withdrawn his bid just two days before polls open on March 18, 2021.

Maendeleo Chap Chap confirmed that its candidate Mutua Katuku would no longer contest the seat left vacant by the late Boniface Kabaka.

The move leaves Wiper’s Agnes Kavindu Muthama to face off with United Democratic Alliance’s Urbanus Ngengele for the coveted seat. 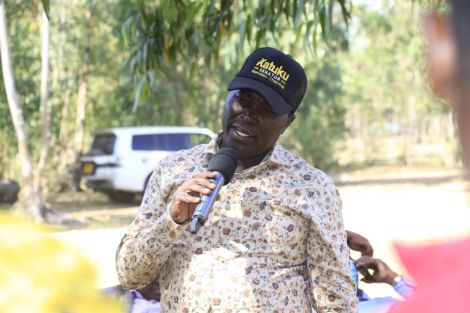 Kavindu enjoys the support of the Jubilee Party, Kanu, ODM, Ford Kenya, and ANC. She is widely expected to receive support from the Maendeleo Chap Chap party which has a close working relationship with Jubilee.

Ngengele, on his part, has the support of Kavindu’s former husband, Johnstone Muthama, and Deputy President William Ruto.

Katuku withdrew from the race just hours after President Uhuru Kenyatta cautioned political parties that the by-election should not result in a divided country.

“In light of the above, (the leaders) urged all their political affiliates and supporters, especially in Machakos, to find a peaceful, amicable and uniting way forward during the upcoming by-elections,” read a statement from State House.

Machakos Governor Alfred Mutua had backed Katuku’s bid citing that he was an experienced politician having served for two terms as MP and as a Cabinet Minister in the retired President Mwai Kibaki government.

“For the avoidance of doubt, the Maendeleo Chap Chap candidate in the Machakos senatorial race was headed for a recording-breaking loss. The UDA candidate should concede or prepare for annihilation. Kavaa mama. Wiper is not taking prisoners,” Makueni Senator Mutula Kilonzo Junior celebrated the news.

“We have chosen Katuku because he is an experienced politician having served for two terms as MP and as a Cabinet Minister in the retired President Mwai Kibaki government.

“Hon Katuku is a development-oriented leader who has the plight of people and their rights in his heart. He is well versed with the workings of government and Parliament hence will not need orientation once elected considering the short period remaining before 2022.

“We don’t want to waste the precious time of the people of Machakos by electing greenhorns or uneducated people who are not able to legislate inside Parliament,” Governor Mutua stated.