BY JOAN WANJIKU,NAIROBI,15TH DEC,2020-The Somali government has severed diplomatic ties with the Kenyan government in an announcement that was made in the wee hours of Tuesday, December 15.

At the same time, Dubbe recalled its diplomats who are stationed in Nairobi. 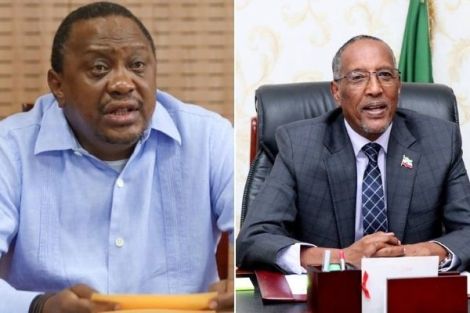 The Flag of Somalia accused Kenya of political interference and violations against its sovereignty.

Mogadishu indicated that the move has seen the regional President of Jubaland renege on the election agreement reached on September 17, 2020, in Somalia’s capital

Somalia added that it strongly upheld principles of interdependence and maintaining friendly relations with neighbouring countries but believes that the Kenyan government’s actions are not in line with internationally recognised diplomatic relations enjoyed by sovereign states.

In a rejoinder, the Ministry of Foreign Affairs in Kenya indicated that it had not received any official or verbal communication from the Federal Republic of Somalia requesting Kenya’s ambassador in Somalia to leave.

The Federal Government of Somalia does not recognise Somaliland’s claim to autonomy and has protested Kenya’s recognition of the breakaway territories.

On December 2, 2020, Dubbe accused Kenya of lacking an understanding of good neighborliness.

He accused Kenya of hosting Somali rebels and claimed that Nairobi, was being used by dissidents to plan and execute missions to destabilise the Somalian Government.

“We have a lot of respect for Kenya, We want to live in mutual interest. However Nairobi does not show any respect for that,” he stated.