Kampala (CNN)Ugandan presidential opposition candidate Bobi Wine has been arrested for the second time this month, sparking violent protests in the country.

The popular musician-turned-politician was arrested while campaigning in Eastern Uganda, according to Wine’s staff — just weeks after a prior arrest. “The price of freedom is high but we shall certainly overcome,” a tweet from his official account read, announcing his detainment on Wednesday.
Ugandan police did not immediately respond to calls from CNN, but in a statement posted on its official website on Wednesday, the Inspector General pointed to tightened Covid-19 enforcement around campaign events.
“Despite repeated warnings issued to candidates, their agents and wider public about the negative impact and health risks of holding unauthorized rallies and processions, we continue to witness acts of defiance and total disregard of the EC [Electoral Commission] guidelines. Therefore, those who shall defy these Electoral Commission guidelines with their sinister plans aimed at disrupting the electoral process will definitely suffer consequences,” the statement read.
While authorities have said the restrictions are necessary to curb the spread of Covid-19, opposition members say that they are an excuse to curb campaigning and intimidate opposition supporters before the upcoming January election.
Following news of Wine’s arrest, protesters took to the streets of Kampala, clashing with police and military who responded with tear gas.
At least three people have died, and at least 34 were injured, Reuters reported, citing Ugandan police and the Red Cross.
Another presidential candidate, Mugisha Muntu, announced that he would pause his campaign until Wine’s release. 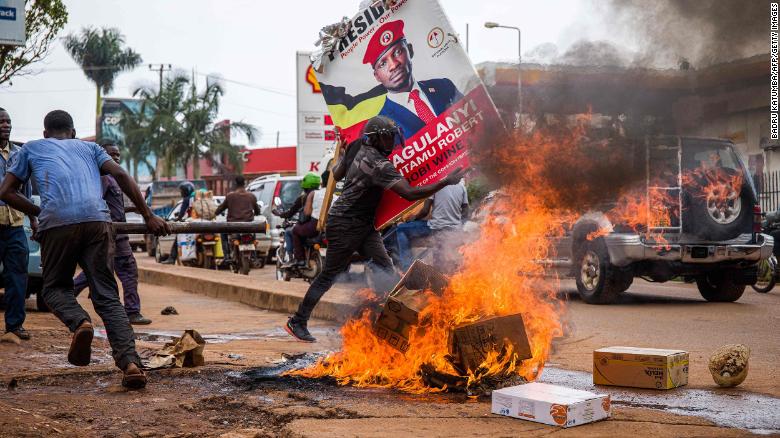 A supporter of Bobi Wine carries his poster as they protest against his arrest in Kampala, Uganda, on November 18, 2020.
Wine, whose real name is Robert Kyagulayi, has been at loggerheads with authorities in Uganda since he entered the political fray.
He joined politics in 2017 as an independent and has remained a thorn in President Yoweri Museveni’s side, condemning his policies and singing songs against his government.
Wine is now challenging Museveni’s three-decade grip on power. He was previously arrested in early November after handing in his nomination papers to the election body.
Facebook Comments

Covid: WHO pleads with Tanzania to start reporting cases