BY KORIR JUMA,NAIROBI,11TH SEPT,2020– Kapseret MP Oscar Sudi on Friday addressed a public meeting in Eldoret where he insisted that he was not an inciter.

The vocal lawmaker insisted he would not be intimidated or cowed to stop speaking out his mind.

Sudi said President Uhuru Kenyatta had responded to the utterances he had been accused of making to incite Kenyans against the first family.

“Yesterday President Kenyatta responded to what I had said and we are now equal. That debate will not end there but I will continue to speak out my mind just like other Kenyans should do,” said Sudi who addressed a sizeable crowd in Eldoret.

Sudi thanked the police for allowing him to address the meeting but warned that they should not accept to be used to intimidate or harass some leaders in the country.

The outspoken MP spoke extensively on graft in the country and accused the government of misleading Kenyans on the Covid-19 situation while allowing some individuals to steal public funds in the health sector. 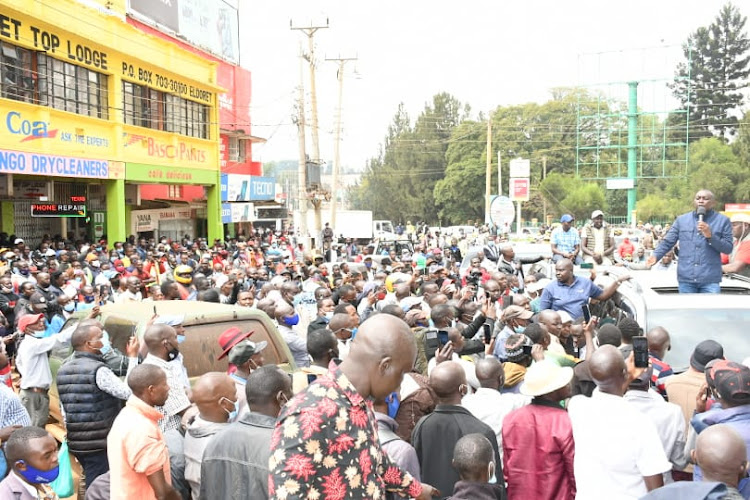 Kapseret MP Oscar Sudi when he addressed a public meeting in Eldoret on September 11, 2020./COURTESY/THE STAR

He wants the President to ensure the arrest of those involved in the theft of funds at KEMSA and other scandals in the ministry of health.

“Let them not try to divert us from the Kemsa debate because we will speak out until the truth comes out. They have been telling us to wash our hands and stay at home yet Covid-19 is fake.  All they wanted was to steal from KEMSA,” said Sudi.

He defended Deputy President William Ruto against accusations of being corrupt and asked Uhuru to ensure the real corrupt leaders are prosecuted as soon as possible.

The MP insisted that the country belonged to all Kenyans and some leaders should not consider themselves as more important.

“I talked out after they arrested my colleague Ng’eno but they should have first arrested the likes of David Murathe and all those corrupt people before going for the Emurua Dikir MP and others,” said Sudi.

He insisted that he cherished peace and would not that communities in the region would co-exist peacefully despite efforts by some local leaders to cause divisions among the communities.

The MP claimed that there had been a scheme to eliminate some leaders because of politics adding that they would soon give more details on the plot that had been hatched by some individuals.

Sudi said many allies of DP Ruto had been sacked or sidelined in government but warned that those responsible should go slow to avoid causing problems in the country.