BY UPESI REPORTER,NAIROBI,14TH JULY,2020-A section of traders in Gikomba market, Nairobi, on Tuesday, July 14, woke up to find their stalls demolished.

The demolition that was conducted under police supervision was meant to pave the way for road construction in the area.

This comes  just two weeks after a fire razed down a section of the market including a number of cereals and mitumba sections opposite COTU offices. 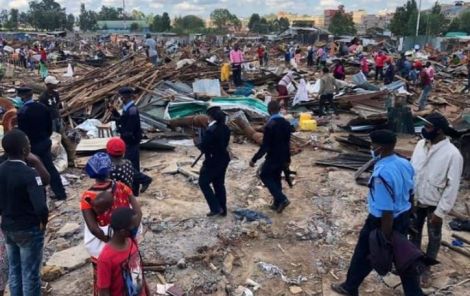 Police at the scene of the demolitions at Gikomba market in Nairobi on July 14, 2020.
TWITTER

The government through Interior PS Karanja Kibicho pledged to compensate traders who lost goods in the fire and announced that investigations would be conducted. 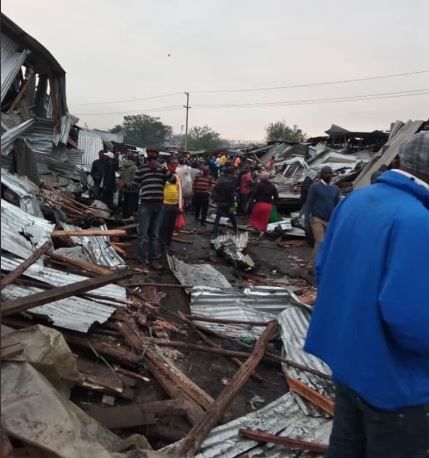 Police at the scene of the demolitions at Gikomba market in Nairobi on July 14, 2020.
TWITTER

The June incident was the fourth time the market has been engulfed in flames in 2020, with a huge section of the stalls burning down to ashes on two separate occasions in April and once in February.

In the latest fire, Starehe MP Charles Njagua questioned whether it was engineered by the government as he noted that National Youth Service (NYS) servicemen were at the market demolishing stalls that traders had reconstructed after the fire.

Jaguar also alleged that GSU officers were also at the site, protecting the recruits that were demolishing the stalls.

It is not the first time the popular market  is making news,the market has had an unfortunate history with unending  fire incidents that have left hundreds of traders counting losses . In August 2019, property worth more than Ksh100 million was reduced to ashes at the market.

Dont write me off just yet,i still have time to roar-President Uhuru

Dont write me off just yet,i still have time to roar-President Uhuru