According to the star Newspaper,In the letter dated January 14, police advised the planners to inform their participants of the changes.

“This is to notify you that this office has canceled your permit to carry out the  exercise purportedly scheduled to take place on 18th due to security reasons,” the letter reads.

new changes to be effected in the second round of engagement.”…and comply accordingly. By this letter, be informed that any person contravening this directive will be held criminally responsible,” it read.

Mudavadi and his Ford Kenya counterpart Moses Wetang’ula have united to oppose meetings to popularise the Building Bridges Initiative report. 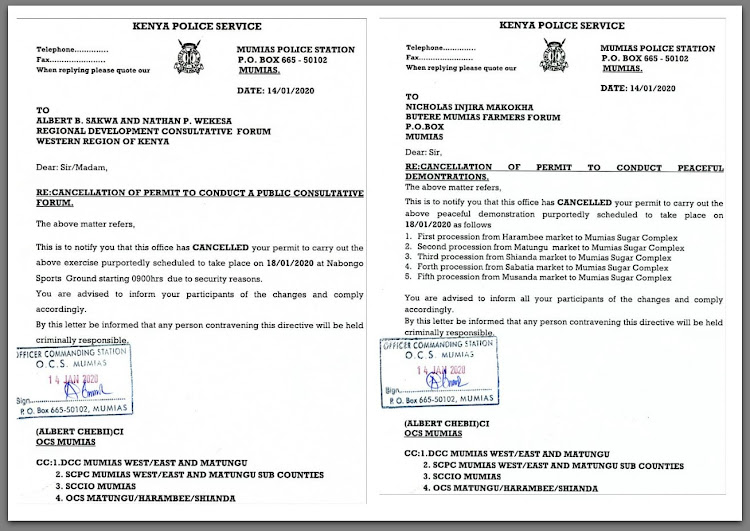 They were scheduled to hold a parallel meeting on January 18 when the BBI gathering will be taking place.

They have vowed not to attend the BBI meeting at Bukhungu Stadium saying they were not involved by the organisers.

Mudavadi said, as Western leaders, all they want is for Kenyans to shun divisive politics being hatched from BBI.

“My brother Wetangula and I have not received an invitation to the January 18 Bukhungu Meeting. Someone decided to invite us through social media,” he said.

The second phase is expected to alter the BBI proposals with an emphasis on the Executive structure, which many quarters have dismissed as weak.

Already, two meetings have been planned this month in Nyanza and Western to not only drum up support for the document but also to suggest new changes to be effected in the second  round of engagement.