The Maendeleo Chap Chap leader  visited Raila at his  office where the two also talked on various issues of national importance including the handshake between the AU envoy and President Uhuru Kenyatta.

The Machakos county boss said the two discussed the ‘philosophical and historical foundation’ behind the March 9 handshake and the need to build a cohesive nation.

“Maendeleo Chap Chap has always supported the handshake from the word go. We see the bigger picture which is political stability, a pre-requisite for economic growth, wealth and employment creation,” Mutua said.

The governor also told Raila about his 2022 ambition to run for the country’s leadership.

“We discussed several scenarios and agreed that political generational change is critical in any society,” Mutua said. 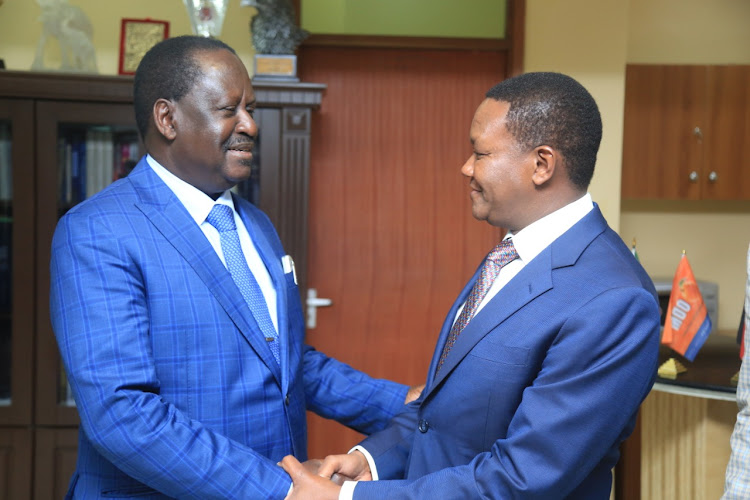 “We agreed to consult occasionally on this matter even as he advised on strategies to popularize my bid countrywide.”

The two leaders agreed that the idea of “winner takes it all” electoral system has been responsible for many problems in the country.

Mutua  said elections have to be transformed to be about ideological and policy contests and not tribal affiliations.

The intention of  Mutua  was that  Kikuyu and Kalenjin politicians  are not supposed to run for the countrys’ top seat   and give others a chance because they have produced the country’s four presidents since independence.